What is the Aman Safety Campaign?

This project is a series of Facebook and Instagram geotargeted campaigns that appear as a video advert on a user’s timeline with a “Learn More” button that connects to a landing page on our website offering more information about exploitation, how to stay safe, and contact information for support organisations in Greece and Turkey. The landing page and video are available in multiple languages. You can view the English version of the video here and landing page here.

‘Seeking Sanctuary in Greece: Prevention of Trafficking of Young People in Greece and the Border of Turkey’ campaign

The first series of Aman campaigns launched across Instagram and Facebook in February 2021 and again in June 2021. Young people aged between 13 and 21, including unaccompanied minors, were targeted in the campaign. The campaign was launched in four languages – Arabic, Farsi, Urdu and Bengali. 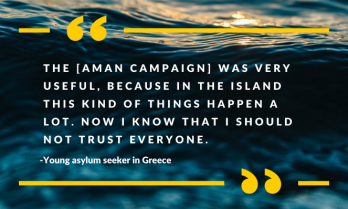 Intelligence gathering is at the heart of our work at STOP THE TRAFFIK. Following a survey and consultations with NGOs working with refugees, asylum seekers, and trafficking survivors in Greece, it was determined that young people, some of who are unaccompanied minors (age 13-21), seeking safety in Greece were the group most at danger of exploitation.

Poverty, homelessness, lack of support with basic services, lack of  knowledge about the asylum process and a lack of understanding about support organisations were identified as enabling factors that put our target group in danger of exploitation. These ‘enabling factors’ not only put young people at risk, but they also become targets as traffickers seek to capitalise on their vulnerabilities. By promoting organisations that provide support with these issues, people will seek legitimate help and be less at risk of exploitation.

The Aman Safety campaign not only creates awareness about human trafficking but also tackles factors that lead to it by providing contacts for support organisations in Turkey and Greece. These organisations offer on the ground support for refugees and asylum seekers with shelter and with their asylum process.

We use social media to Geo-target people and communities at risk, which may be difficult to reach through traditional methods.

Results of the campaign “Young People and Unaccompanied Minors”

As a result of both campaigns: 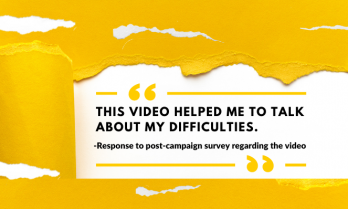 Case Study 1: A Survivor of Trafficking Who Broke His Silence

In the post-campaign survey, we inquired if the video was helpful. A male young person under the age of 18 from Bangladesh responded as follows: ‘This video helped me to talk about my difficulties.’

One of the challenges that survivors of exploitation often face is being able to talk about their trafficking incident, either due to fear, feelings of shame or the pain of recounting the experience. Unfortunately, that can prevent them from seeking help, can increase isolation and make them at risk of exploitation again. As seen in previous campaigns, survivors often find it helpful to recount their experiences by referring to the video to explain what happened. We hope that by speaking about his experience, he was able to receive support and can take steps towards a positive future.

The one-minute video tells a fictionalised story of a young person who experienced exploitation and sought help in Arabic, Farsi, Bengali and Urdu languages.

After seeing the campaign, A 16-year-old unaccompanied minor from Afghanistan contacted one of our signposted partners: Defence for Children International. The young boy was unregistered in Greece and he approached them for assistance with his asylum application, legal assistance, and accommodation; all of this was provided, and he is now receiving full support.

Quotes from Our Target Audience

According to our campaign results and further research, we have identified young refugees and asylum seekers that speak French who come from African countries that are vulnerable to exploitation. As a result, the campaign will run in September 2021 to target young people from French-speaking countries who are still arriving or passing by Turkey and Greece.

Are you an organisation based on the ground that would be interested in working in collaboration with us on this project? Your insights can help shape our campaign messages, ensuring they are as targeted and effective as they can be, and we can promote your organisations and the services you offer. We would love to hear from you.