STOP THE TRAFFIK have kicked off 2018 with the launch of our multi-medium campaign in the Bay Area, California. The campaign will be on billboards, on social media and in communities throughout this year.

The campaign is in partnership with the Alameda County District Attorney Nancy O’Malley’s HEAT Watch Task Force (Stop Human Exploitation And Trafficking). DA O’Malley was keynote speaker at our event Building Resilience in the Bay Area event in San Francisco last year. She is a nationally recognised expert in human exploitation and trafficking. During her time in office she has led the state wide charge in response to human trafficking. The campaign has been vastly enhanced by the expertise and intelligence provided by HEAT Watch.

Our work in California this year is enabled by collaboration with the Bay Area Anti Trafficking Coalition (BAATC). STOP THE TRAFFIK’s social media campaigns are built on partnerships with local agencies. Our campaigns are intelligence-led, and local agencies inform our data with localised knowledge. This enables maximum impact. We are grateful to BAATC for both local insight and connecting us with many other local NGOs.

In January, the Alameda County District Attorney’s Office launched anti-human trafficking billboards in 45 locations across Alameda County. The message tells viewers unashamedly “It’s real and it’s here”. Imagery implies sexual exploitation of minors and domestic servitude. The press conference launching the campaign reached multiple major publications in the Bay Area, including one published for the Chinese community there. This is the fourth year that the DA’s Office and District Attorney Nancy O’Malley have launched their billboard campaign across the county.

In early February, STOP THE TRAFFIK launched intelligence-led Facebook posts focused on the same issues. The posts were geo-located to Oakland, San Francisco and San Jose. The content of each location was identified through local recommendations. These came from Heat Watch, BAATC and other local NGOs including Regina’s Door, Love Never Fails and New Day for Children.

STOP THE TRAFFIK is working in partnership with the Human Thread Foundation, founded by critically acclaimed human trafficking photographer, Lisa Kristine. Lisa has generously provided imagery for the campaign.

Thank you to all those organisations that have made invaluable contributions. We look forward to working further with you in future.

250 000 people viewed the posts across the three cities. 33 035 of these clicked through to read the full intelligence posts, meaning an incredible 7.5% click through rate.

The following week, IBM took the opportunity to invite San Francisco area employees to learn and engage with STOP THE TRAFFIK CEO Ruth Dearnley. Martin Laird, Director of Community Programs at IBM, hosted the session at IBM offices on Market Street. The session explored the unique collaboration that STOP THE TRAFFIK is building across business, enforcement, the financial sector, community, faith and third sector leaders. 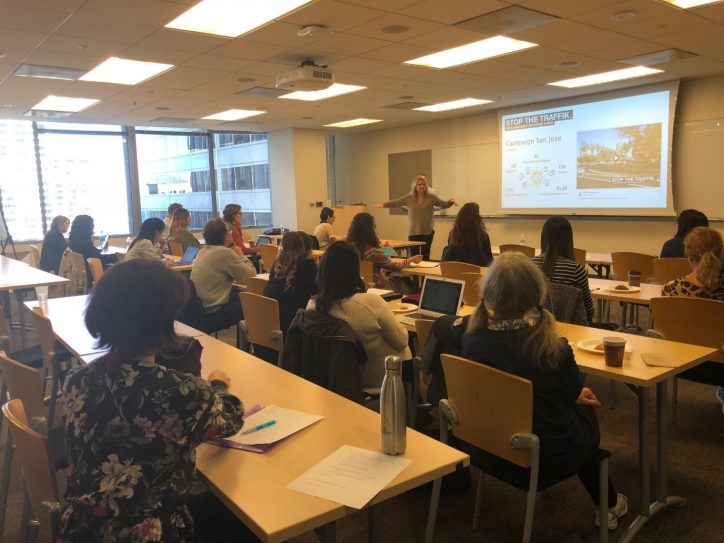 Later that day, STOP THE TRAFFIK led a consultation session bringing together 15 NGOs from across the Bay Area, supported by BAATC. Together the agencies plotted out future action around data driven discoveries following the campaign. Guided by local intelligence, BAATC and STOP THE TRAFFIK will identify an even more focused an accurate second phase of the 2018 campaign.

Watch our blog to keep up to date with this campaign.