Our latest social media campaign #SpotTheSignsPuzzle follows the story of Jane, a young girl trafficked into prostitution. Each puzzle piece represents a sign of human trafficking and each day they come together to form an overall picture. Read her story below and see if you would spot the signs.

From teenage dream to devastation

Jane* was your average 14-year old American girl. She met Daniel* by chance, at a bus stop on the way home from school; he slipped into her life so seamlessly. Jane barely noticed her friends leave one by one, slightly disconcerted by the presence of an older man. Jane didn’t mind, he made her laugh, bought her pizza and alcohol, made her feel grown-up, told her she was beautiful. He was different, not like all the other immature guys around. Daniel had depth, mystery. And he said the kindest of things… 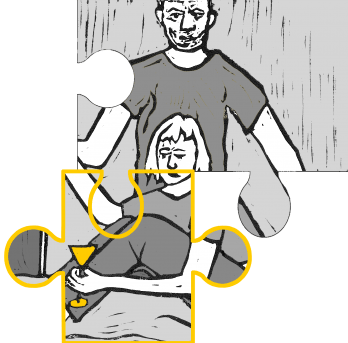 Things changed dramatically when he invited her back to a motel that same night. Jane was giddy with spirits, full and happy, but the way Daniel pushed her into the car jolted her quickly to sobriety. Her arms were red with his fingerprints, throbbing. She tried to open the door but it had been locked. Panic set in and a hand quickly muffled her shouts, pressed a needle into her arm and the last thing Jane remembered was the rumble of the engine and the uneasy motion of the car moving off, taking her and her future with it.

When Jane awoke, her mouth was dry and head was pounding. Daniel’s blurry smile came into focus and he muttered some charming words, back to his usual self. Perhaps she’d exaggerated the violence… He ushered her out of the car, supported her as she walked groggily towards a dingy-looking building. Jane’s body ached all over, her muscles felt leaden and her steps were forced. That hot red grip on her arm returned and she was pushed up several flights of stairs and into a stuffy motel room.

SIGN 3 – under his instruction, they go to a motel room

Daniel threw her onto the bed, rough bleached bedding next to her skin. Jane was too weak to move. She tried to reach for her phone but couldn’t find it in her pockets. She tried to focus on something, anything, catching a glimpse of a shattered screen in Daniel’s hand, before drifting back into unconsciousness, dreading what Daniel would do to her next. 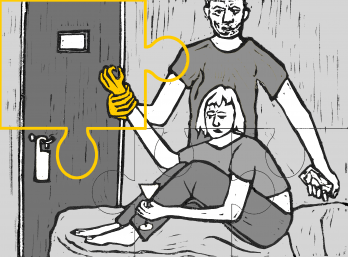 The next morning, Jane looked down at her arms, bruised and red. She wanted to curl up and disappear. What could she do now? She felt so isolated and withdrew deep into herself, not responding when Daniel nudged her, telling her they had to leave. She couldn’t even open her mouth when the motel receptionist waved her good morning. She looked back over her shoulder as Daniel escorted her out quickly, willing someone, anyone, to see her.

Daniel arranged for Jane to engage in sexual activities with 10 men over a 2-day period. For Jane this was just the beginning of a treacherous path that she found herself treading, a path that seemed like a one-way street.

Checking into another motel one evening, a particularly observant member of staff noticed a number mobile phones in Daniels bag and the bruising on the young girl’s arms, leading to the rescue of Jane and other young women imprisoned in the same trafficking ring. They were taken to safe housing where they could rest and receive support and are being encouraged to share their stories with the authorities.

The signs were all there, Jane thought. Why didn’t anyone notice before?

Jane’s story is not uncommon: young girls lured in with false promises and trapped into a lucrative underground business. Recognising the signs of human trafficking are essential in disrupting these crimes.

SPOT IT. REPORT IT. STOP IT.