A new GIFT box was launched in the USA, on Monday 8th of October 2018 at Union Square, New York City.

It was launched by STOP THE TRAFFIK USA in affiliation with ECPAT-USA together with over 70 volunteers.

The GIFT box is a walk in street-sculpture which on the outside appears to be an elaborately wrapped gift inviting visitors inside with gift tags promising jobs and opportunities. Once inside, visitors are faced with a different reality; stories from survivors of human trafficking around the world who were lured in by such promises. This unique project raises awareness of human trafficking by inviting visitors in to read stories and talk to volunteers, but is also a valuable opportunity to gather information on the issue from visitors who may have seen something they suspect to be trafficking, or who may be victims of trafficking themselves. 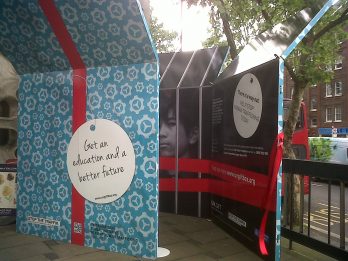 STOP THE TRAFFIK and the United Nations Global Initiative to Fight Human Trafficking (UN.GIFT) joined to create the GIFT box in 2012. It was launched in London during the 2012 Olympic Games, and has been developed globally since then. It has already taken place in various locations in Brazil, including Rio, São Paulo, Belo Horizonte and Goiania. These editions of the GIFT box saw thousands of visitors, including people who had experienced human trafficking personally.