Human trafficking on the darknet

The anonymity offered by the Darknet has created a space for illicit vendors and customers to conduct their business online. Policing this space is incredibly hard, and speculation around the use of the Darknet as an enabler of human trafficking has inevitably been made in recent years.

STOP THE TRAFFIK teamed up with Cyjax – an expert cyber-intelligence company – to investigate supply, demand, and users’ perception of human trafficking on the Darknet. The aim was to gain more insights on the role of the Darknet in human trafficking, and to try to understand whether it can actually provide a platform for traffickers to exploit people. 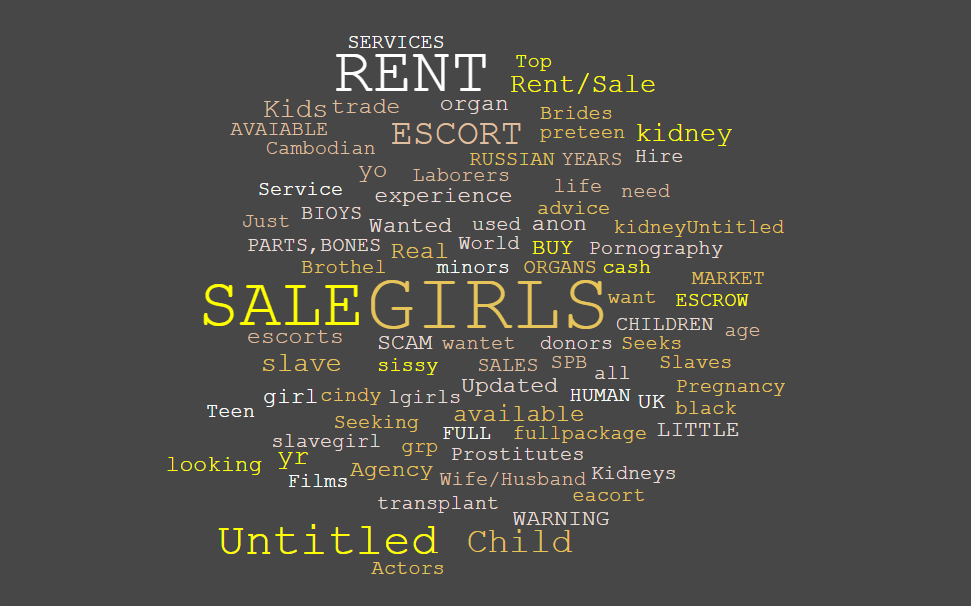 We spent three months monitoring a site called “DeepPaste” where people can “paste” information of any kind for other anonymous users to see. We recorded every entry that suggested the exploitation or trade of human beings and saved all the replies that users left under these pastes.

The most common titles associated with human trafficking mentioned the “rent” and/or “sale” of girls, services of “child escort agencies” and offers of slaves and organs.

Interestingly, the majority of users’ comments in response to these pastes were far from showing interest in a genuine transaction and purchase. In fact, more often than not, these pastes were called out as “scam” and their posters as “scammers”.

What does this tell us? We could assume that the majority of pastes that try to sell or rent human beings are fake. However, often scams related to a product are a sign of demand for said product. The users that call out scams and leave negative comments underneath these pastes could have two objectives: on the one hand, they may be disgusted and absolutely opposed to these offers; on the other, they may be looking for a genuine offer and simply be calling out scams to prevent others from falling for them.

We have no way of knowing with certainty which of these scenarios is true.

However, it is no surprise that in this world there are people willing to exploit and abuse those that are vulnerable, and we can be reassured by the fact that some of the scams are likely to be part of law enforcement initiatives to stop this activity.

For a more in-depth understanding of the Darknet, human trafficking and some examples of interactions between users, you can download and read the full report.

...
Human Trafficking and the Darknet

WARNING: some readers may find the content of this report offensive or upsetting.