International Women’s Day: why are women still being bought and sold?

On International Women’s Day, STOP THE TRAFFIK’s Head of Strategic Communications, Lizzy Jewell, reflects on the need for a feminist approach to activism and human trafficking prevention.

In 2012, while in my final year of university, I took part in one of STOP THE TRAFFIK’s photo campaigns. 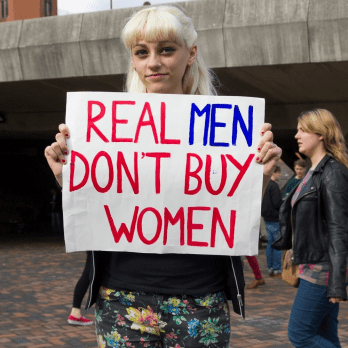 This was the very start of my journey with STOP THE TRAFFIK. I loved the bold use of language to tackle the gender issue head on. Women are being bought and sold for profit every day: forced sex work, domestic servitude, and forced marriage are all gendered in their nature. And as a budding feminist, I wanted to take action.

I know more about trafficking now, and I understand the levels of exploitation that happen to men, too. But eight years ago I found myself hungry to champion the rights of women. In the time since this photo was taken, STOP THE TRAFFIK’s work has morphed – less grassroots campaigning and more preventative action. But both STOP THE TRAFFIK’s values and mine, have not changed: we refuse to accept a world where so many people are exploited for profit.

The fact is that trafficking affects women and girls in a very specific way, and so on International Women’s Day, I’m focusing on what we can be doing in 2020 in a world where women are still bought and sold.

I love International Women’s Day, and really, any excuse to celebrate the incredible achievements of women close to me and throughout history. Celebration is vital, we have come a long way! But we cannot celebrate without acknowledging the fact that we’ve got a long way to go.

Globally, women are more likely to be unemployed. More likely to be in poverty and hunger. Women make up two thirds of the world’s 796 million illiterate people. Violence against women and girls affects one in three women worldwide.

The system is still broken, and still disproportionately impacts women and girls.

How does trafficking affect women?

Sex trafficking is the most well known form of human trafficking that affects women. Let’s be clear: there are women who take part in sex work consensually. But this isn’t the experience of the majority, and regardless of our opinions about whether this is right or wrong, our goal must be to fight exploitation wherever we find it. Exploitative sex work (this could be prostitution) is something that is impacting millions of women’s lives.

It’s impossible to know for sure, but we think that women and girls make up for around 71% of trafficked people. The issue of human trafficking, as a feminist, is impossible to ignore.

Eight years after my first interaction with STOP THE TRAFFIK, I’ve found myself working here. It’s a joy to work for a cause that’s so close to my heart.

As Head of Communications, my team and I look after the brand image of STOP THE TRAFFIK, and we deliver campaigns. We get to write articles, create films, and design campaigns. The best thing about my job is that I get to talk about the things and the people who inspire me. To celebrate International Women’s Day, here are three activists who are inspiring me today in the fight against human trafficking.

Sunitha Krishnan is tackling the cycle of exploitation by providing a safe home and education for the children of exploited sex workers in India. After experiencing an extremely violent sexual assault, she turned her anger into activism and now has been part of a rescue and rehabilitation process for numerous young people. Sunitha co-founded Prajwala, or “eternal flame,” a group in Hyderabad that rescues women from brothels and helps their children into education.

You can learn more about Sunitha here, follow her on Twitter, and listen to her TED Talk.

Sophie Hayes is the alias of a British woman who was trafficked from the UK to Italy by a close friend for the purposes of sexual exploitation. Her lived experience has given her an inspiring drive to help others. She wrote a book sharing her story, and founded the Sophie Hayes Foundation, an NGO in the UK which does fantastic work around employability for women survivors of human trafficking.

You can buy her book Trafficked, learn more about the Sophie Hayes Foundation.

Racha Haffar is a feminist journalist and activist, and she is using her profile to raise awareness of human trafficking worldwide. Racha says that the biggest problem is lack of knowledge – both in those who could prevent trafficking, and among victims who don’t always have the words to describe what has happened to them. She is the founder and president of ‘Not 4 Trade,’ the first anti-human trafficking NGO in Tunisia, and is member of UN Women’s Beijing+25 Youth Task Force.

It’s an honour to spend International Women’s Day shouting about the amazing achievements of women who either have lived experience of exploitation, or are using their voices to fight it.

And I’m so incredibly lucky to work as part of a team that includes and champions talented, ambitious women: data analysts, writers, video producers. I’m so excited to be part of STOP THE TRAFFIK as it grows bolder, braver, and more ambitious. Let’s make 2020 the year we fight exploitation harder than ever before.

County Lines – How we can help protect children from exploitation

If you are in or around Liverpool this week, make sure to stop by @lushliverpool and say hello to the fantastic @ACTLiverpool team who have kindly been allowed to set up in store all week to raise awareness around Human Trafficking and Modern Slavery.
#lush #humantrafficking

Do you know that reporting your suspicions of trafficking activity can help prevent it around the🌎?
It is anonymous and safe. Download the app here: https://t.co/TUEt7XucIX...
To learn more: https://t.co/7GWhT8R0Wh
#stopapp #exploitation #humantrafficking #report #incident