Human trafficking and modern slavery are global issues. STOP THE TRAFFIK works globally to disrupt these networks and build resilience in these vulnerable communities.

Our Nigeria-Libya-Italy campaign was just 1 of 5 social-media campaigns launched by STOP THE TRAFFIK this year. In total, we reached almost 2,000,000 people in these locations.

Watch the video below for highlights from all our global campaigns this year.

None of this would have been possible without the amazing support from our donors. Donate to our ‘Shine A Light’ Christmas Appeal to help us achieve new levels of awareness and resilience in vulnerable communities in 2018.

Together, we can STOP THE TRAFFIK.

The CfILP then feeds information we have collected on human trafficking back into specific local communities. We share intelligence about community-specific risks and vulnerabilities and target this information to relevant demographics, via social media and local partners.

By sharing this information, together with tools and resources, the local community is empowered to build resilience against trafficking.

We engage local partners on the ground to inform our choice of location, imagery, language and resources. By bringing together their recommendations and our intelligence, we are able to choose ‘hotspots’ along trafficking routes. 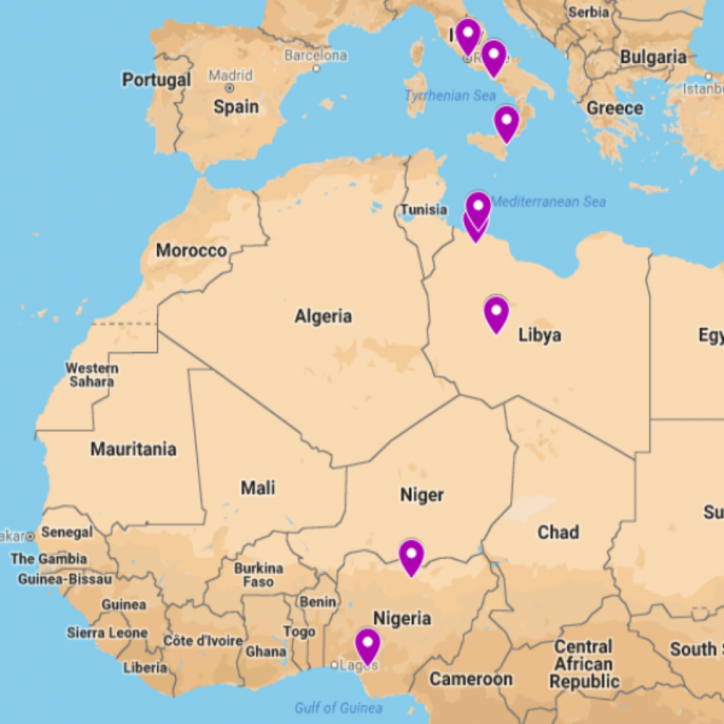 A map of the hotspots along the route

In September, STOP THE TRAFFIK embarked on our most ambitious campaign to date, targeting the well-known Nigeria – Libya – Italy trafficking route. An enormously profitable and highly-organised criminal network has been functioning between these three countries for over two decades. Furthermore, instability and lawlessness in Libya has fuelled an increase in people’s vulnerability to this abuse. The UN’s International Organisation for Migration states there has been an almost 600% increase in the number of potential sex trafficking victims arriving in Italy in the past three years.

STOP THE TRAFFIK’s recent campaigns across Nigeria, Libya and Italy raised awareness around these issues, using Facebook posts to target eight hotspots along the route: 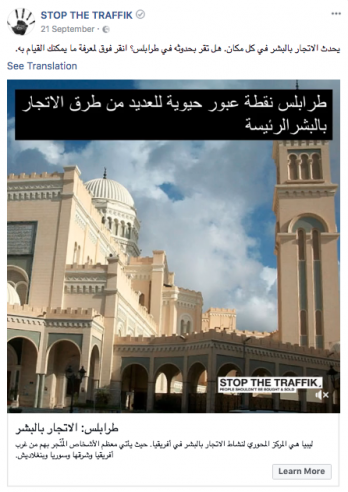 A Screen Shot of one of our Tripoli Facebook posts

To engage with each local community, we posted in six languages across the hotspots. In Libya we posted in French, Arabic and English; in Nigeria in Nigerian Pidgin and Hausa (Nigerian Tribal Dialect), and in Italy in Italian.

These posts highlighted and raised awareness of the exploitation occurring in these locations. Audiences were able to click on ‘Learn More’ to access Intelligence Posts on the STOP THE TRAFFIK website. Their purpose was to offer more detailed information and resources to help individuals combat human trafficking in their community.

These were broadcast in Nigerian Pidgin on Trend FM in Delta State, and on Bronze FM in Edo State, and in Hausa on Rahma Radio in Kano State. 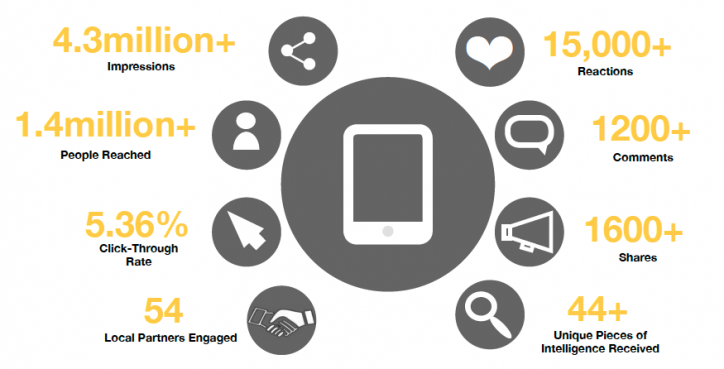 The Facebook results from our Nigeria – Libya – Italy campaign.

With 1.4 million individual people reached and 1600 shares, the instant impact of the campaign was high.

We also established the Anti-Human Trafficking Network, a community Facebook engagement group for individuals and organisations from the target countries. With 25 members representing over 12 different anti trafficking organisations, the group is facilitating weekly discussion. We have also received weekly intelligence from the ground in Libya through this tool.

Donate to our Christmas Appeal here. Help us reach our £3000 target.