Sex work and exploitation: what do you need to know?

If you suspect someone is a victim of trafficking or exploitation, you can call the Modern Slavery Helpline at 08000 121 700 for support, or you can report directly from the online reporting form at the bottom of this page.

According to research, there were approximately 72,800 sex workers1 in the UK in 2015. Buying and selling sex is legal in most circumstances in England, Scotland and Wales, with some exceptions such as brothel-keeping and persistently soliciting in a public place.

What’s the difference between sex work and exploitation?

Sex workers may operate willingly and independently, arranging their own appointments and often using online advertising sites to manage business and vet clients. However, not everyone who offers sexual services does so because they want to. Some are vulnerable individuals who are, in fact, victims of sexual exploitation, a form of modern slavery and human trafficking.

People of all ages, genders and sexual orientations can be susceptible to this exploitation. They are coerced or deceived into providing sexual services and treated as commodities by criminals. They are forced to work very long hours for little or no pay, threatened with violence if they do not comply and are often debt bonded to their trafficker – being told they have to keep working until the alleged debt is repaid. Sexually exploited victims have little or no say in who they do or don’t have sex with. They are stripped of their dignity and basic human rights.

Many independent sex workers use adult services websites (ASWs) as a platform for advertising sexual services online because they provide them with greater control over who they provide services to, allow them to agree terms around the services available in advance and control what services they are consenting to provide, and increase their own personal safety. However, ASWs also provide an easy access point to a very wide market making them attractive to traffickers for selling the services of sexually exploited victims.

These adverts will be placed amongst legitimate adverts to make them appear to be from consenting, independent sex workers. Clients of sexual services should consider that the person placing the advert may not always be a consenting sex worker.

The hidden nature of sexual exploitation

Trafficking victims may not ask their clients for help, as they may not know who to trust or are too scared of what will happen to them and their families. Some victims mistakenly believe that all prostitution is illegal in the UK and are scared to seek help from the police, or originate from countries where corrupt practices remove trust in authority.

Given the hidden nature of sexual exploitation, victims are often kept out of sight of the wider public by their exploiters, but may be advertised as, or even operate alongside, independent sex workers. Clients of sex workers have access to private spaces where they could identify victims. When booking appointments and visiting any premises, clients of sex workers should think about the signs of exploitation.

What to look out for

It is important to remember that victims of sexual exploitation are forced to work against their will. To identify someone who is in need of help, you can look out for the following signs:

How you can help

Whilst paying for sex is currently legal in England, Wales and Scotland, Section 53A of the Sexual Offences Act 2003 states that someone who pays or offers to pay for the sexual services of a prostitute is guilty of an offence if the individual providing the sexual service has been forced, threatened, deceived or coerced into doing so by a third person. This makes it illegal to have sex with a trafficked or exploited individual, regardless of whether the client is aware of the trafficking or exploitation.

This blog is the result of evidence-based research in consultation with relevant stakeholders.

If you're worried about someone 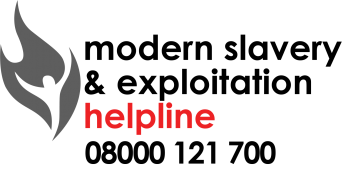 If you suspect someone is a victim of trafficking or exploitation, you can call for support or learn more here.