A tool to enable people across the world to join the fight against human trafficking and modern slavery.

Human trafficking is happening in plain sight all around us. Have you ever seen something that looks out of place? Does uncertainty stop you from speaking up?

Every human trafficking story, no matter how long or short, whether current or historic, is important and relevant. It may be the missing piece of the puzzle, contributing to a larger and more accurate picture of human trafficking, which can then inform efforts to combat it. Technology places the power to prevent into the hand of a person who holds a mobile device.

The STOP APP can be downloaded by anyone, anywhere in the world who has access to a smartphone. The app is anonymous, confidential and secure – it is available in seven languages and allows you to submit suspicious activity quickly by sending text based messages and uploading photos and videos. 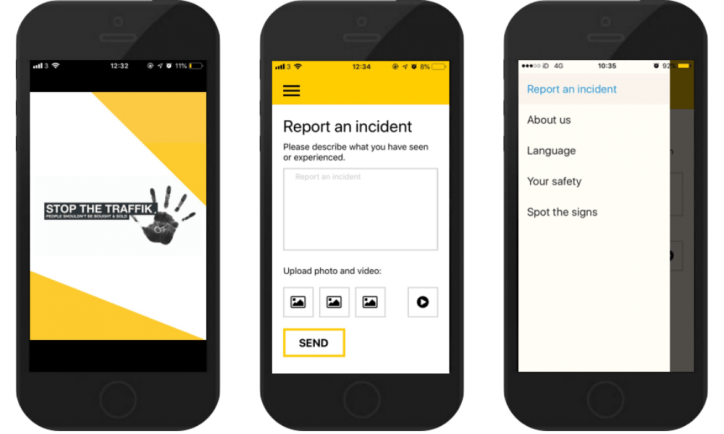 How to use the STOP APP

Originally developed for us by 5 Stones and launched in 2016, the STOP APP is the first of its kind to enable people anywhere in the world to report suspicious incidents of human trafficking anonymously and securely.

What happens with the information

All information reported into the STOP APP is fed directly into STOP THE TRAFFIK’s secure database where it is analysed alongside multiple different datasets on human trafficking and modern slavery activity.

Our analysts transform this raw data into useful insights that contribute to a better understanding of global human trafficking activity globally. The insights are developed into informative and easily digestible visualised reports, which are then shared with appropriate authorities, organisations, communities and individuals to enable an informed and targeted response to prevent and combat human trafficking.

Have you seen anything suspicious?

You can also share information with us safely and securely online.

What exactly is it and who is it aimed at?

The STOP APP is a tool which enables anybody who knows, has seen or even heard a situation that they believe to be human trafficking, to talk about it in a safe and secure space. The information given will contribute to a larger and more accurate picture of human trafficking, a picture which can then inform efforts to combat it.

We want anybody to use it: activists, members of the public who see or hear of something suspicious, NGOs, even police/immigration officers. Anybody who has reason to believe they have witnessed something.

Is it a substitute for making a report to the Police?

NO! If you have information about a crime happening now, or it is clear that someone is at risk, you should tell the authorities first and STOP THE TRAFFIK second. There will be times where the individual may not trust the local authorities and will choose to act differently but that is for them to decide not for us to direct them.

What kind of details can be submitted?

Users can write as much or as little information as they feel comfortable with sharing in the open text box. Information that is particularly useful in any case is a summary of the incident, the type of exploitation, location of exploitation and gender of individuals involved.

There are also options to include a photo and or a video you may feel is relevant, instead or as well as the text.

Is it safe for the person submitting data?

The first thing a user sees when they open The STOP APP is a page of information about safety and usage. It encourages the user to hide The STOP APP amongst other apps on their phone and to use it in a secure place.

The user can make the report anonymously and there will be no record of the report submitted on the user’s phone. The user should only input the data when they are in a safe place away from the suspected incident.

What about data protection?

Another good question. The Centre for Intelligence Led Prevention is a project within STOP THE TRAFFIK. STT is a UK registered charity and is registered as a Data Controller with the Information Commissioner in the UK. We will always abide by European data protection law and we have legally reviewed written policies that set out how we do this. We will only share information with organisations that operate to equivalent standards and in particular

What do you do with the data?

When data is entered into the app it is sent to and held in a secure layer of the Cloud accessible only to STOP THE TRAFFIK. We then turn the raw data into intelligence using professional analysts and state-of-the-art analytical tools, which will process it and look for patterns. This will then give us information on human trafficking trends and hotspots in different parts of the world. It will potentially highlight particular businesses or areas that are vulnerable and thus allow for focused action from those trying to address the issue. In some cases, it will identify human traffickers or victims.

Who is informed so something can be done?

We have to be careful to operate within data protection law. We will only give personal information to organisations that have signed a data sharing agreement with us to ensure they meet the appropriate data protection standards. We will only give information to a law enforcement agency where there is a court order in place and when we believe it is safe and appropriate to do so.

What if the data is about someone in immediate danger?

The App encourages the user to report such incidents immediately to the authorities. At the same time, we will have a system in a place in which relevant organisations and authorities will be contacted so that appropriate action can be taken if we deem it necessary to do so for that particular situation.

Who pays for this?

STOP THE TRAFFIK is a charity registered in the UK. The Centre for Intelligence Led Prevention is paid for primarily through charitable donations to STOP THE TRAFFIK.

Many of the professional staff supporting the Centre work without charge and much of our software and hardware has been provided free by organisation such as IBM who believe in our objectives and want to support us.