Human trafficking is a newly recognised crime. Recent data from ILO estimates there are over 40 million people worldwide in situations of human trafficking and modern slavery. As awareness is still low, lack of reporting creates a lack of data. It is therefore difficult to accurately say how much more exploitation occurs in disaster zones.

UNICEF recognise that humanitarian crises often increase vulnerability, particularly for women and girls [1]. Factors such as crowded unsuitable shelters, and lack of governance, create ripe environments from which traffickers can work. 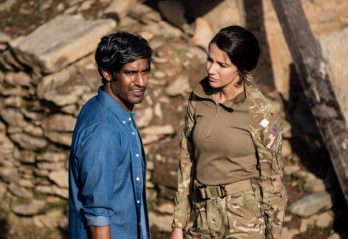 In the BBC drama Our Girl, Nepalese engineer and NGO worker, Milan (far left), is the coordinator for the fictional Nepal earthquake. He recognises how children are lured by others, identified as ‘agents’, into exploitation, by the prospect of ‘work’ in foreign countries. Dubai and Hong Kong are the fictional choices of destination. As Milan states, “There are no jobs for people in Dubai or Hong Kong. These people are trafficked to God knows where.”

The second episode of this series focuses upon the trafficking of numerous young girls from the village by Gautam De Chand, an “opportunist”, as described by the Police Commissioner, pretending to represent an NGO in the disaster. Tara, an orphan from the 2015 earthquake, is particularly vulnerable. In a conversation with De Chand she asks “So you promise you’ll help me?” Having previously stated that “everything has gone”, the prospect of a ‘better life’ is depicted as appealing for these young girls.

As defined by the United Nations Office on Drugs and Crime, human trafficking includes:

“The Act of recruitment, transportation, transfer, harbouring or receipt of persons, by means of the threat or use of force or other forms of coercion, of abduction, of fraud, of deception, of the abuse of power or of a position of vulnerability or of the giving or receiving of payments or benefits to achieve the consent of a person having control over another person, for the purpose of exploitation.”

Our Girl, featuring Michelle Keegan as lead Lance Corporal Georgie Lane, is fictional. However, the situations portrayed reflect on the wider global issue of human trafficking in disaster zones. During the 2015 earthquakes in Nepal, over eight million people, nearly one-third of the country’s population, suffered loss or damage [2]. As also seen in Our Girl, in the absence of security and accommodation, and widespread parental bereavement, instances of human trafficking increase considerably. Many were promised education or work in other cities when in reality were being trafficked abroad. Rajan Burlakoti, Child Protection Officer at UNICEF, said, 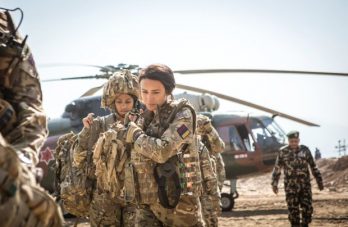 “Traffickers impersonated aid workers, they pretended they were there to support the villagers and help families overcome the trauma of the earthquake.

They actually approached the victims who were desperately waiting for relief and other assistance and they took advantage of their situation. They would somehow be some of the first ones who would make it to these people… would offer help but in return they would take their children away.”[3]

Similarly, after the Haiti earthquake of 2010, false promises of a better future were enticing to vulnerable communities. Displaced persons camps were containing over 80,000 families, making them difficult to monitor [4]. Security was also less strict in and around Haiti to allow supplies and groups to move in and out [5]. Both factors allowed trafficking to occur more easily. Like De Chand in Our Girl, “People [came] into the camps posing as NGOs, and foreigners that have come to help Haiti”, according to Françoise Moise, a Brigade de Protection des Mineurs (BPM) officer [6].

Vulnerabilities in both disaster and stable, domestic situations enable traffickers to operate. Our Girl, is using popular culture to help raise the global profile of human trafficking and modern slavery.

You can help raise the profile of trafficking by learning to Spot the Signs.

Help those who may be at risk of human trafficking; download the STOP APP today and report any known or suspicious activity.